There has been a spate of good news in regard to Climate destabilisation. In the first week of October, in Strasbourg, the EU block of countries voted to ratify last December’s Paris Agreement on climate change. Prior to that decision, more than sixty other countries, including the USA, China and India, amounting, between them to about 52% of global emissions, had already formally agreed to ratify the Agreement. With the EU countries’ accession, the 55% mark (at which point the agreement comes into force) was exceeded. Now that it is a done deal, many other countries, including New Zealand, have joined the party. The Paris Climate Agreement’s enactment should be formalised by the UN on the 4th November.

Rather than total despair, we are now justified in having a more realistic hope of future generations leading lives devoid of climate trauma. However, such hopes will be conditional on the global population uniting to ensure that its leaders do very much more than simply pay lip service to the Paris Agreement. Continuous grass-roots pressure will be required to deliver politicians from the temptation to win popularity by seizing whatever national, short- term economic competitive advantages they might be able to score off other nations in the international endeavour to combat climate change. https://www.reuters.com/article/us-climatechange-paris-idUSKCN12523G

Earlier this month, wearing my ‘activist’ hat and acting as the webmaster for its site, fellow members of Climate Karanga Marlborough, asked me to post two new pages on the website. The first of these ‘A load of codswallop’ https://climatekaranga.org.nz/a-load-of-codswallop/ is for the benefit of CKM members tired of proffering rational arguments to counter those of the ostrich flock of climate change denying Flat-Earthers. These, following the disinformation put out by such as EXXON and the American Petroleum Institute, continue to offer enticements for society’s continued inaction on the climate issue (while the members of the Green House Gas (GHG) emissions club continue to rake in the shekels.) Should any readers of this blog face such problems (similar to attempting to argue with the religious convictions of creationists) I would suggest they refuse to enter into discussion until after their opponent had first read the two articles on CKM’s ‘codswallop’ page. Only then can the debate be launched from a rational and common starting point.

The second new page ‘Good News’ https://climatekaranga.org.nz/good-news/ contains two U-Tube clips, which between them take about two hours to view. These two clips represent the most exciting news yet in humanity’s battle for survival against the climate change, which it is doing so much to accelerate. The clips convincingly argue that the fossil fuel economy is going to disappear well before 2050 and that the vast majority of such fuels as remain will be left unburnt, as stranded assets underground. Much of what follows will be incomprehensible if you are not aware of the looming ‘Solar Disruption’ contained in CKM’s ‘Good News.’

The ‘Solar Disruption,’ the move from fossil to alternative energy sources, driven by technological advances, will prove every bit as revolutionary as did the disruption caused by the development of the internal combustion engine. This technological advance, combined with good old capitalist lust for profit, is now stripping capital investment out of the currently so dominant and so destructive fossil fuel industry.

The rate of fall in the costs of solar energy is comparable to that of the fall in the cost of computer memory over the past half century. The projections show alternative energy having replaced fossil fuels in land transport and electricity generation within ten or so years. Even though Donald Trump claims to be an ardent Climate change denier as well as a groper of women, a Trump presidency would hardly delay the progress of the Solar Disruption. It is now an irresistible economic imperative, out of the control of politicians, which is driving the process. A Clinton presidency, on the other hand, might easily provide a nuclear winter as a permanent solution to the problem of global warming. (Call to mind Stalin’s famous dictum “People are the problem: no people: no problem!”)

Below is a pie-chart of Green House Gas (GHG) emissions by sector, published by the Intergovernmental Panel on Climate Change (IPCC) in 2014. There is huge complexity in measuring GHG emissions and allocating them to different sectors, particularly the agriculture component, where different sectors come up with different figures depending on how allocations are made.

In the www.grain.org article quoted below, Agriculture and food production is, with equal justification, credited with around 50% of total global emissions.

As displayed in the above pie-chart, the complete electrification of land transport would reduce global emissions by around 14%. What is currently technically possible, would seem to exclude air and most sea transport emissions from this calculation. Were the entire global electricity generation to become alternative, it would reduce the emissions by a further 25%. Of the other sectors in the chart, ‘Industry’ and ‘Buildings’ would also seem to ultimately be liable to becoming emission free during the course of the Solar Disruption. ‘Agriculture, forestry and other land uses’ are a different matter and are discussed below.

The Solar Disruption is going to slow the rate of climate change: in itself, however, it will neither stop nor reverse it. It will take more than several decades, for the revolution to take over the whole world. During and even after this transition and though at an ever declining rate, GHGs from fossil fuels will continue to enter the atmosphere at a faster rate than Nature’s declining powers can scrub them out of it.

Nor does that calculation take into account agricultural emissions which, according to this article https://www.grain.org/article/entries/4357-food-and-climate-change-the-forgotten-link make up approx. 50% of total global emissions. I don’t apologise for quoting several paragraphs from that article, the implications of which which are crucial to an understanding of the urgency of the Agrarian Disruption.

“Clearly, we will not get out of the climate crisis if the global food system is not urgently and dramatically transformed. The place to start is with the soil.

Food begins and ends with soil. It grows out of the soil and eventually goes back in it to enable more food to be produced. This is the very cycle of life. But in recent years humans have ignored this vital cycle. We have been taking from the soil without giving back.The industrialisation of agriculture, starting in Europe and North America, replicating later through the Green Revolution in other parts of the world, was based on the assumption that soil fertility could be maintained and increased through the use of chemical fertilisers. Little attention was paid to the importance of organic matter in the soil. 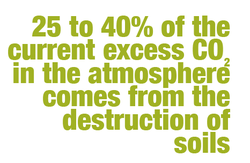 A wide range of scientific reports indicate that cultivated soils have lost from 30 to 75% of their organic matter during the 20th century, while soils under pastures and prairies have typically lost up to 50%. There is no doubt that these losses have provoked a serious deterioration of soil fertility and productivity, as well as contributing to worsening droughts and floods.

Taking as a basis some of the most conservative figures provided by scientific literature, the global accumulated loss of soil organic matter over the last century may be estimated to be between 150 to 200 billion tonnes.[12] Not all this organic matter ended up in the air as CO2, as significant amounts have been washed away by erosion and have been deposited in the bottom of rivers and oceans.  However, it can be estimated that at least 200 to 300 billion tonnes of CO2 have been released to the atmosphere due to the global destruction of soil organic matter. In other words, 25 to 40% of the current excess of CO2 in the atmosphere comes from the destruction of soils and its organic matter.

There is some good news hidden in these devastating figures. The CO2 that we have sent into the atmosphere by depleting the world’s soils can be put back into the soil. All that is required is a change of agricultural practices. We have to move away from practices that destroy organic matter to practices that build-up the organic matter in the soil.

We know this can be done. Farmers around the world have been engaging in these very practices for generations. GRAIN research has shown that, if the right policies and incentives were in place worldwide, soil organic matter contents could be restored to pre-industrial agriculture levels within a period of 50 years – which is roughly the same time frame that industrial agriculture took to reduce it.[13]  The continuing use of these practices would allow the offset of between 24-30% of  current global annual GHG emissions[14].

It is clear that, by itself, the ‘Solar Disruption’ is not going to solve the problem of climate destabilisation: a major Agrarian and Dietary Disruption will also be required. A reasonable, layman’s, guess would have it that, even should the optimists’ best case scenario work out, the Solar Disruption be maximised and the process of destabilisation be slowed, within the next century, the climate is still going to overshoot the Paris Agreement’s target comfort level of a 1.5C increase – possibly by 100% or more.

Unless some new and more economically viable technology can be developed to scrub GHGs from the atmosphere and get the climate back in kilter, a huge reforestation of the planet will be required. Room for that will have to be made by an agrarian revolution and a radical change in human eating habits.

To mobilise mankind to the extent required, small farmers will have to triumph over the financiers and today’s giant agribusinesses, to which ‘husbandry’ is an alien concept. There will have to be a move back from the cities and into the countryside. Such a revolution would address the problem of emissions all along the industrialised food chain.

In a previous Blogs No. 66, https://khakispecs.com/?p=1507 I discussed the consequences of Human carnism.

The environmental case for such a large scale adjustment to human eating habits is equally well matched by the economic case presented in this March 2016 article. https://www.theatlantic.com/business/archive/2016/03/the-economic-case-for-worldwide-vegetarianism/475524/

At the end of that article there is a seven-minute U-Tube clip on meat replacements derived from vegetables. My wife and I, having ourselves made the leap from carnism to veganism, have not suffered any cravings for meat that would make us seek out such meat-like substitutes. For dairy, the switch from cows’ to soy and other vegetable ‘milks’ and spreads initially called-for only the smallest amount of will-power. We were both lucky and exceptionally motivated by the potential shame of blithely talking the talk without walking the walk. Others less fortunate might find it harder to kick their addiction to dead animals – but I know many, who have had no problems whatsoever.

Finally it is worth considering the economic opportunities which a ‘disruption,’ be it solar, or agrarian, on such a global scale will entail. Think of the consequence of the Solar Disruption alone. Houses no longer require garages. Taxi companies cease to exist. Cities no longer require parking facilities. Electricity utilities struggle to remain profitable and most probably, ultimately disappear. Vehicle maintenance becomes a minor industry and road-worthiness testing, a thing of the past. Vehicles last for decades without needing replacement. Road accidents no longer occur and country pubs boom. Traffic cops, meter wardens and all that other surplus labour, is redeployed to planting trees, etc., etc. That is only a small indication of how interesting future times are likely to prove.

Something to add? Please leave a comment in the box below